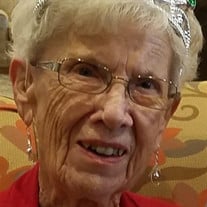 Adrian-Alice M. Platt-Wright, 90 of Adrian, passed away Friday, October 5, 2018 at ProMedica Bixby. She was born on August 30, 1928, in Rockford, Michigan, the daughter of James and Helen (Osmer) Williams. She graduated from Greenville High School and then attended MSU where she met her husband while enrolled in a short course class. Alice married Richard Platt on June 18, 1949. He preceded her in death in 1992; they had celebrated 43 years of marriage. She was preceded in death by her second husband, Dean Wright. Alice was a member of Tipton Community Church, where she was involved with the choir, the Women’s Fellowship serving as president, and taught Sunday school. Alice was also a 4-H leader teaching sewing and a member of Pythian Sisters for fifty plus years, holding many offices including Grand Chief. She was a wonderful wife, mother, grandmother and great grandmother and will be greatly missed. In addition to her husband, Richard, Alice was preceded in death by her parents; brothers Harold and Gerald Williams; her sister, June Ingraham and her son-in-law, Steve Siler. Alice is survived by her children Robert (Sandy) of Tipton and Susan Siler of Grand Rapids, MI; a brother, Franklin Williams of Saginaw; grandchildren, Heath (Donna) Platt, Aaron (Morgan) Platt, Bryce Siler and Jenny (William) Pilger; 6 great grandchildren and 1 great great granddaughter born the day after Alice’s death. A memorial service for Alice will be Saturday, October 13, 2018 at 1 pm at Tipton Community Church with Rev. Eric Hickman officiating. Burial will follow at Franklin Cemetery. Visitation will be at the church from 11 am until the time of the service. In lieu of flowers, memorial contributions in Alice’s memory may be made to Tipton Community Church or to the donor’s choice. Arrangements are entrusted to Wagley Funeral Home where online condolences and memories may be shared at www.WagleyFuneralHome.com

Adrian-Alice M. Platt-Wright, 90 of Adrian, passed away Friday, October 5, 2018 at ProMedica Bixby. She was born on August 30, 1928, in Rockford, Michigan, the daughter of James and Helen (Osmer) Williams. She graduated from Greenville High... View Obituary & Service Information

The family of Alice Platt-Wright created this Life Tributes page to make it easy to share your memories.

Send flowers to the Platt-Wright family.