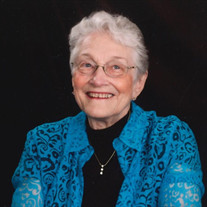 CHELSEA, MI – Alice Louise “AliLou” Paterson, 97, formerly of Adrian, passed away early in the morning on Monday, January 24, 2022 at her residence at the Chelsea Retirement Community. AliLou was born on August 11, 1924 in Detroit, Michigan to J. Wesley and Alice Jeanette (Bryan) Dennis. She was the middle daughter in the Dennis family of three lovely girls AliLou graduated from Central High School in Detroit with the Class of 1942 and went on to receive a bachelor’s degree in Science from Adrian College in 1946. It was during her time at Adrian College that AliLou met her future husband, D. Duncan Paterson, Sr. They were married on June 21, 1947 in her hometown of Detroit. AliLou and Duncan shared 65 years together before his death on July 27, 2012. Education was always important to AliLou, and she dedicated her life to teaching; earning her master’s degree in Education from Siena Heights University. She taught from 1968 to 1985 and was a positive influence at Lincoln Elementary before she retired. AliLou belonged to the Golden Alumni Club at Adrian College, a life membership at Lenawee County Education Association, MEA, and NEA. She was a member and past officer for the United Methodist Women. In her later years, AliLou enjoyed traveling with Duncan to Haines City, FL in the winter months and leaving the cold of Michigan behind. She is survived by her children Cynthia (David) Luchenbill of St. Charles, MO, Patricia Paterson of Dewitt, MI, D. Duncan (Marsha) Paterson, II of Adrian, and J. Douglas (Karla) Paterson of Marquette, MI; grandchildren, Deborah (Jacob Schloss) Luchenbill, Erin (Timothy LeDoux) Luchenbill, Joshua (Melissa) Zeluff, Derek (Megan) Zeluff, D. Duncan (Sarah) Paterson, III, Danielle (Austin) Wagley, Diedre (Chance) Lauver, Kara (Derek) Woodman and Heather (Bryan) Seitz; 17 great-grandchildren and her sister, Janet Douglass. AliLou was preceded in death by her parents; husband, Duncan; a daughter in infancy, Barbara Paterson; and her sister, Margaret Rink. Following AliLou’s wishes, cremation has taken place. A memorial service will be held on Saturday, May 14, 2022 at 11 a.m. the First United Methodist Church, in Adrian, with Rev. Eric Stone officiating. Visitation will be from 10:30 a.m. until the start of the service. Arrangements have been entrusted to Wagley Funeral Home in Adrian. For those people who would like to watch the Patterson Funeral via live stream this coming Saturday, the url is: https://vimeo.com/event/2103902 Memorial contributions may be made to Adrian College or Hospice of Lenawee. Online condolences and memories may be shared at www.WagleyFuneralHomes.com.

The family of Alice Louise "AliLou" Paterson created this Life Tributes page to make it easy to share your memories.

Send flowers to the Paterson family.