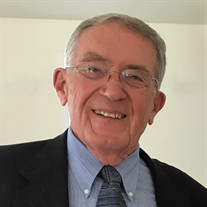 ADRIAN – Alden Forrest Smith, 89, of Adrian, Michigan passed away peacefully at home surrounded by his loving family on Saturday, December 11 after a courageous battle with cancer. Alden was born on November 30, 1932, in Adrian, Michigan to Albert Forrest Smith and Thelma (Brock) Smith. On September 16, 1952, he married the love of his life, Marian Willett. Al and Marian enjoyed 42 wonderful years of marriage until her untimely death on February 9, 1995. Al graduated from Adrian High School in 1950 and joined the United States Air Force in 1951, proudly serving his country until 1955. Upon returning to Adrian, he worked in the accounting department at American Chain and Cable before taking a position at Bohn Aluminum & Brass where he rose to the position of Plant Controller. Al’s love for the City of Adrian and service to his community was his true calling. He was a member of the local Jaycees chapter serving in many positions at the chapter and state level before receiving the prestigious Jaycee Senator award. In 1970, Al was appointed to the Adrian City Planning Commission, where he served until 1979 including four years as chairman. In 1980, Al was appointed to fill a vacant position on the Adrian City Commission and was later elected to a commissioner seat. In 1982, Al was appointed Mayor by the City Commission, he then ran for Mayor in the 1983 election and served two more years in this role. In 1985, Al found his dream job when he was selected to serve as the City Administrator, a position that he held until his retirement in 1998. He later returned to part-time work as a consultant for the city in 2003 and then again as the Interim City Administrator in 2006. Al had a great number of accomplishments over his 30 years of service to the City of Adrian, but his proudest achievement was the passage of the bond issue for the completion of the new Adrian Fire Station. The city honored him for his many contributions by renaming the Fire Station building after him on his 80th birthday in 2012. During retirement, Al was actively involved with the Lenawee Historical Museum, serving on the board and as treasurer for several years. Above all else, family was the most precious thing to Al, especially his wife Marian who preceded him in death in 1995. Al is survived by his son, David (Sarah); daughter, Sue; sister, Lois (Keith) Snyder; brother, Richard (Joanne) Smith; grandchildren Cory (Kathy) Smith, Adam (Gabrielle) Smith, Crystal (Alex) Levine, Victoria (Chris) Whiting, Daniel (Ashley) Smith, Julianna Smith; great grandchildren, Stephen, Joshua, Alissa, Zachary, Dylan, Riley, Isobel, Freya and Miles. He was also a beloved uncle to many nieces and nephews and a loving friend to Laura & Jim Doyle and many others. He was preceded in death by his father and mother, A. Forrest & Thelma Smith; sister, Kathryn and son Richard (Laura) Smith. Al was an avid sports fan of all teams Detroit and the University of Michigan. A season ticket holder of U of M football for over 30 years, he passed along his passion for University of Michigan sports to his children and grandchildren. Go Blue! After retiring, Al could often be found working outside in his yard and garden or enjoying long walks around town especially with his daughter’s golden retriever Cody. Funeral services for Al will be take place on Monday, December 20, 2021 at 2 p.m. at Wagley Funeral Home, Adrian with Rev. Larry Betz officiating. A live streaming of the service will be accessible from Al’s tribute wall on www.WagleyFuneralHomes.com where a link to view the recording will be available for 90 days. Burial will follow at Oakwood Cemetery where full military rites will be conducted by the Annis-Flint Post #1584 and the American Legion Post #97 of Adrian. Visitation will be held on Sunday, December 19, 2021, from 1 to 5 p.m. at the funeral home. In memory of Alden and to honor his dedication to the city, memorial contributions can be made to Lenawee Historical Museum and Hospice of Lenawee. Online condolences and memories may be shared at www.WagleyFuneralHomes.com.

ADRIAN &#8211; Alden Forrest Smith, 89, of Adrian, Michigan passed away peacefully at home surrounded by his loving family on Saturday, December 11 after a courageous battle with cancer. Alden was born on November 30, 1932, in Adrian, Michigan... View Obituary & Service Information

The family of Alden Forrest Smith created this Life Tributes page to make it easy to share your memories.