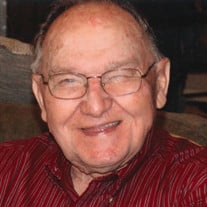 ADRIAN – Albert Burton Hoag, 91, of Adrian, died on Wednesday, March 30, 2022 at Promedica Charles & Virginia Hickman Hospital with his family by his side. He was born on November 12, 1930 in Adrian, Michigan to Ward and Elizabeth (Pike) Hoag. Al was quite studious and excelled in mathematics, graduating early from Adrian High School when he was only 16 years old. Al served his country in the Michigan National Guard and was involved in the Korean War. In October of 1978, Al married Donna L. Souders in Adrian and they shared almost 35 years together before her death on October 1, 2013. Al was able to combine his love of farming with business and owned AB Hoag Farm Supply in Madison Center and later Tecumseh from 1961 to 1974. Later in life, Al owned and operated Plane View Acres which focused on heavy equipment attachments. Always one to take the time and visit, Al was well known and had many friends in the farming community. He was a volunteer fireman for Madison Township in his younger years. Al was a former member of the Adrian Eagles and Elks, and belonged to Michigan Farm Bureau. He is survived by his children, Rick (Shyrl) Hoag of Ankeny, IA, Timothy (Tracy) Hoag of Adrian and Greg (Bev) Hoag of Sand Creek; stepchildren, Bruce (Melissa) Carpenter, Jr., Cheryl (Greg) Elliott and Mike Carpenter; grandchildren, Brandon, Kris, Patrick, Cameron and Allison; and many wonderful great-grandchildren and great-great-grandchildren; brother-in-law, Harvey Souders; special friend and caregiver, Cathy Barricklow and Joan Beekel. Al was preceded in death by his wife, Donna; stepdaughter, Tracey Bujalski and great-grandson, Matthew Hoag. Visitation will be held on Tuesday, April 5, 2022 from 3 to 7 p.m. at Wagley Funeral Home, in Adrian. Funeral services will be private with burial to take place at Oakwood Cemetery. Memorial contributions may be made to Hospice of Lenawee or Sand Creek Community Church. Online condolences and memories may be shared at www.WagleyFuneralHomes.com.

ADRIAN &#8211; Albert Burton Hoag, 91, of Adrian, died on Wednesday, March 30, 2022 at Promedica Charles & Virginia Hickman Hospital with his family by his side. He was born on November 12, 1930 in Adrian, Michigan to Ward and Elizabeth (Pike)... View Obituary & Service Information

The family of Albert "Al" Burton Hoag created this Life Tributes page to make it easy to share your memories.

Send flowers to the Hoag family.