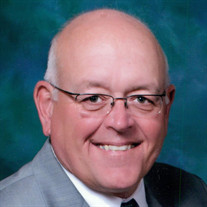 OTTAWA LAKE – Alan Dean Berry, age 64, died of heart failure on July 8, 2018 in Ann Arbor, MI. Alan is survived by his wife, SallyJo Tevis-Berry, of 27 years of marriage; his daughters, Shelley Marks and her husband, Michael with their children, Ava and Evan; and Jennifer Berry with her children, Dena and Chase Redlinger; and his son, Jason Berry, and his wife, Carrie with their children, Molly, Courtney, Emberly and Ethan; his mother, Hazel Berry; his siblings, Cindy Cousino, Bruce Berry, Diane Ebright and her husband, Bob and David Berry and his wife, Mindy. He was preceded in death by his father, Arthur Gene Berry in 2016. Alan was born July 3, 1954, in Adrian, MI, to parents, Arthur and Hazel (Bierman) Berry. He graduated from Blissfield High School in 1972, and attended Kirtland College where he graduated with a degree in aviation mechanics. He then accepted a position as chief of aviation mechanics at Owens Corning Fiber Glass – Corporate Jets Division, where he proudly worked for 32 years. Alan was a loving husband, father, grandfather, son, brother, uncle, nephew, cousin, co-worker and friend. Alan was a deeply religious man who was involved in his faith as well as outreach to others. He was honored to have been a life-long member of St. John’s Evangelical Lutheran Church in Riga, MI. He served as Sunday school teacher and elder as well as held several council positions. He enjoyed farming with his family, sitting in his rocking chair listening to the birds, reflecting on God’s sky full of arts, and traveling to other countries and states with family and work. His family and friends will always remember him as a loving, God-fearing man, and a helpful man to those who needed him. Visitation is scheduled for Alan at the Wagley Funeral Home, Tagsold Chapel in Blissfield on Wednesday from 2 to 4 p.m. and 6 to 8 p.m. The funeral will take place at 11 a.m., Thursday, July 12, 2018 at St. John’s Evangelical Lutheran Church in Riga with Pastor Justin Shrum officiating. All are welcome to attend and celebrate Alan’s life. Burial will be private. The family would like to thank The University of Michigan Hospital for providing the utmost care for Alan in his final days here with us. In lieu of flowers, donations can be made to St. John’s Evangelical Lutheran Church in Alan’s name. Online condolences and memories may be shared at www.WagleyFuneralHomes.com.

OTTAWA LAKE &#8211; Alan Dean Berry, age 64, died of heart failure on July 8, 2018 in Ann Arbor, MI. Alan is survived by his wife, SallyJo Tevis-Berry, of 27 years of marriage; his daughters, Shelley Marks and her husband, Michael with their... View Obituary & Service Information

The family of Alan D. Berry created this Life Tributes page to make it easy to share your memories.

Send flowers to the Berry family.